On our last trip, James 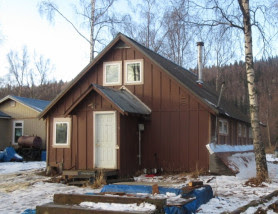 was talking to one of the Native elders about the house, wondering if it was worth putting the effort into repairing.  He got quiet, then said, “Mr. Van [Gale Van Diest, original InterAct missionary to Holikachuk] built that house in Holikachuk.  When the village moved over here to Grayling [in 1962], he took it apart, marked every board with a marker, then rebuilt it over here.”  There is a lot of history in that house, both for the people of Grayling and our mission.

June 7-19 found us in Grayling, and we welcomed a work crew of two men to volunteered their time and expertise to help save the mission house.  The basement walls have been caving in for some time, and we’d just about reached critical mass:  if something wasn’t done this summer to stabilize it, it was in danger of collapsing.  Many thanks to Tom and Ryan for days of hard work that got the house secured on pilings, and for the hours spent in fellowship and just enjoying the setting of the village.

Enjoy a glimpse into those Alaska summer days below:  you’ll almost feel like you were there – WITHOUT the mosquitos.  🙂

Jared and Timothy get to be boys

First barge of the year (which had some of our lumber)

Great entertainment to see just how much stuff is packed on board and to watch it being unloaded.

hauled them into the house and down into the basement.

Headers had been placed…

posts were placed with footers beneath and secured to the header.

The Yukon’s finest: king salmon had just started running, and our neighbor brought us a couple beautiful fillets from his first catch.

Timothy’s very first fish ever! A grayling from Grayling Creek in Grayling. 🙂 He cast and reeled it in himself.

Two-fer: upon gutting the northern pike he caught, Tom found a freshly-swallowed grayling.

Timothy and friends loaded up Shannon’s lap with all the flowers found to be in bloom: bluebells, nagoonberry blossom, northern starflowers.

And the younger kids not allowed in the water climbed the bank instead.

We made a fire ring out in front of the house, perfect for hot dogs and s’mores.

Looking around the mission house sheds, we found a cut lock and several things missing, including the motor to our snow machine. A week later, a very excited group of boys brought it to us, having found it abandoned on a back road. The message sent from one of the dads: “It’s a gift from God.”

Finding our path through the sky back to Fairbanks.